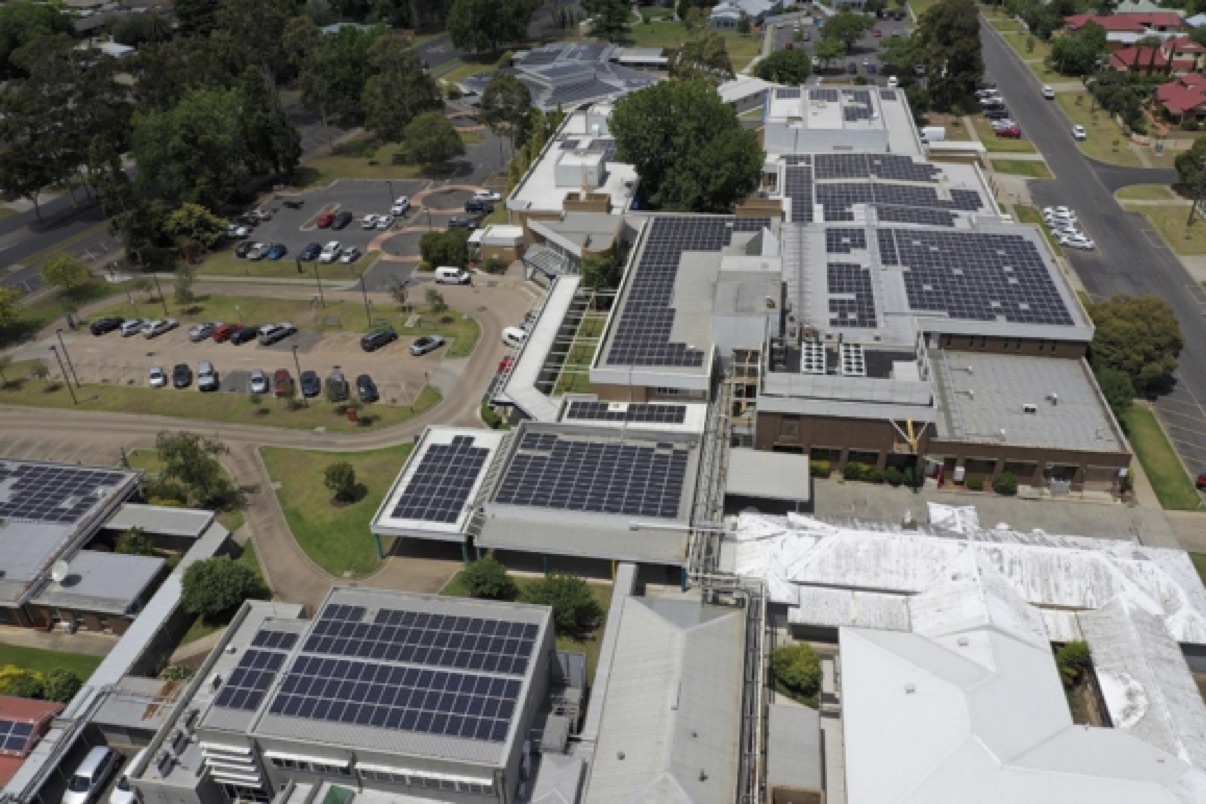 Heralded as the largest solar panel installation project on any hospital in Australia, Central Gippsland Health (CGH) in Sale is now being powered by more than 2,200 solar panels.

The extensive solar array has won the praise of Victorian Premier, Daniel Andrews, who has featured the project heavily on his social media accounts. Welcoming Australians to the future, the Premier hoped this impressive solar farm would set a precedent for hospitals nationally where they could comfortably rely on solar power to operate effectively.

For CGH, the solar panels will reduce annual carbon emissions by 3500 tonnes, 961 tonnes of greenhouse gas emissions and after three and a half years, is expected to save the Sale Hospital around $250,000 a year in electricity bills.

This Gippsland Solar team finished the installation in December 2018 that includes eight inverters with full remote monitoring and email alerts in the unlikely event of a system failure.

CGH Chief Executive Officer (CEO), Frank Evans, said it was estimated solar would account for 33 per cent of power usage at the adjoining Wilson Lodge and 11 per cent of Sale Hospital’s usage.

“To put it in context, the Sale Hospital system is 1.5 times the size of the Bendigo Hospital system, which is pretty impressive when you compare the population of these two regional cities,” Mr Evans explained.

“It was a mammoth project and both Gippsland Solar and CGH need to be commended for managing to deliver this project in challenging circumstances like aadhering to quiet times during theatre operations, managing the power shutdown within CGH guidelines and commissioning after hours.”

Mr Evans said the transition to solar energy had been smooth with no noticeable differences in the way both Sale Hospital and Wilson Lodge were being operated.

“It’s a credit to modern technology and the intricate systems in place that allow a major healthcare facility to transition from electricity to solar power without any interruptions to operations,” he said. 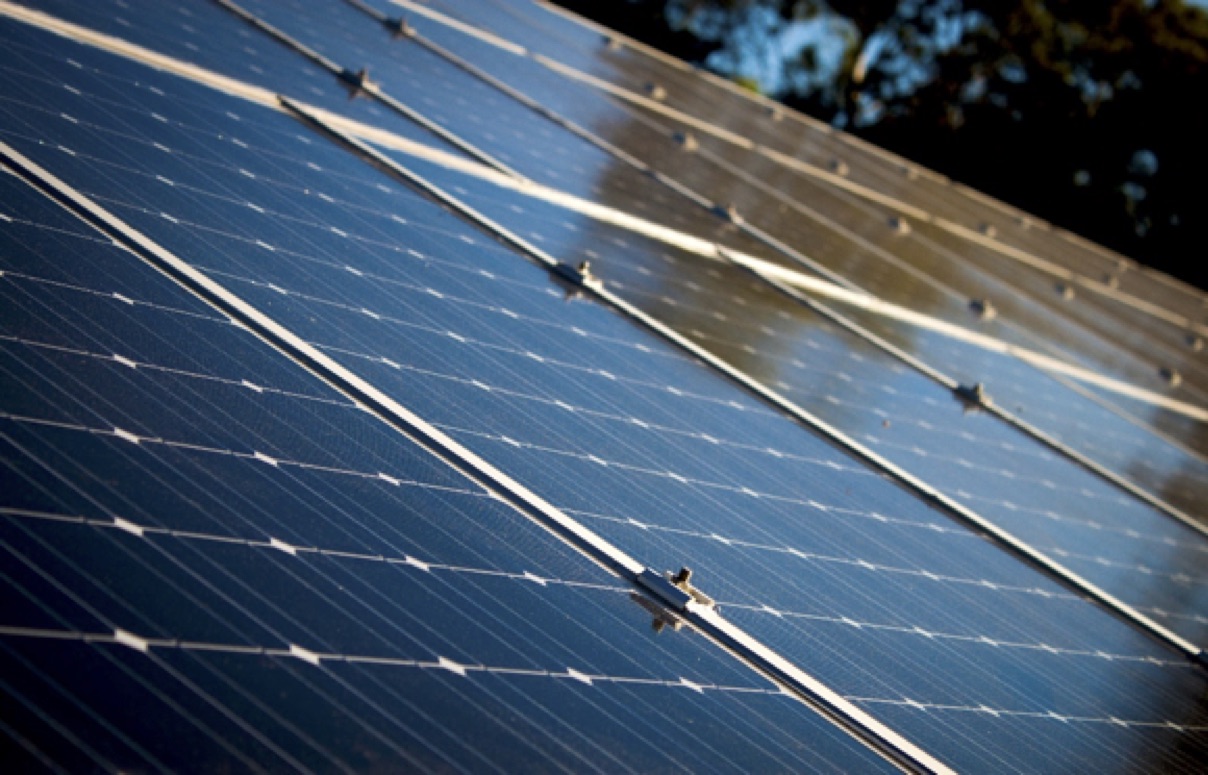 Western Health have installed a 300 kilowatt system on their aptly named "Sunshine Hospital".

Western Health’s Acting CEO, Russell Harrison has been instrumental in securing this opportunity. As Executive Sponsor of the Western Health Sustainability Committee, he acknowledges “this is a significant achievement for Western Health, demonstrating strong commitment to “doing the right thing’ socially and environmentally within the local communities we serve. In addition, installing large scale solar power generation is ‘stacking up financially’ as indicated by the consultation with hospital accountants in considering this project.

“I congratulate Western Health’s CEO and Executive Team on its courage and conviction in championing this project.” says Catherine O’Shea, Western Health’s Sustainability Officer. Climate change has been identified as both the “defining health issue” and the “greatest global health threat” of the 21st century (World Health Organisation) in recent times.

“It is fabulous that Western Health can provide leadership on the uptake of large scale solar as it comes into commercial affordability. I hope others will follow suit.”

Rooftop solar is particularly compatible with healthcare settings expansive roof spaces and intensive daytime operation. It can only increase the resilience and the energy security of the hospital’s electricity supply to have another source of electricity. Producing solar electricity on hot days in summer reduces the likelihood of ‘blackouts’ for the hospital and beyond. This project forms part of an energy management plan for Sunshine Hospital which aims to mitigate energy intensive healthcare services with energy efficiency projects and renewable energy installation.

In June this year Western Health hosted the Healthcare Environmental Sustainability Forum in collaboration with the Climate and Health Alliance (CAHA) and the Institute of Hospital Engineers (IHEA), presenting its environmental research program, energy efficiency opportunities in the face of impending price hikes and practical case studies to engage clinicians in issues of environmental sustainability in healthcare.

Clinicians are highly aware of the links between climate change and health. The direct health impacts of climate change already include significant increases in heat-related illnesses, infectious diseases, cardiovascular diseases, injuries, and respiratory diseases. These result from more extreme weather patterns including an increased frequency of storms, droughts, floods and heatwaves.

“Walk lightly so we can all walk on.” 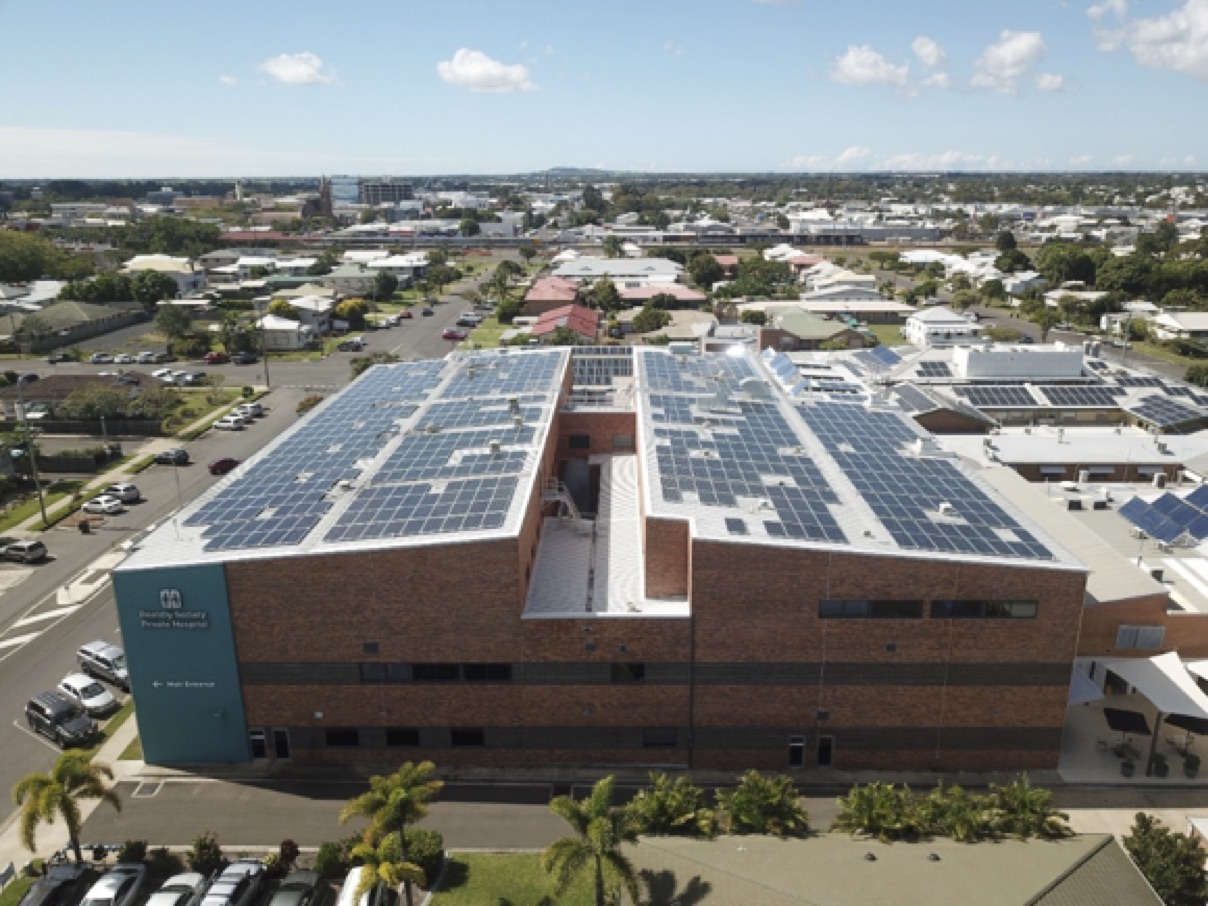 The Friendly Society Private Hospital's 545 kilowatt system has been projected to pay for itself within 4 years.

What is believed to be the largest solar energy system on a hospital in Australia will be installed at the Friendly Society Private Hospital during the next three months.

The project will see the installation of 1253 individual 435w panels on all available roof space of the hospital and maintenance shed, with a total system size of 545kW.

Friendly Society Private Hospital Business Development Manager Stuart Bonnett said the solar system was an investment of more than $1M, and was being paid for by the hospital, without any state or federal funding. With the cost savings in electricity, the system will pay for itself in just four years.

“We believe that environmental sustainability is the only way forward, through solar electricity, solar hot water and LED lighting,” Mr Bonnett said.

Mr Bonnett said solar energy was something the hospital had started looking at in the past few years, but it wasn’t until the hospital received news of a 30% increase to its $80,000 per month electricity bill that The Friendlies decided to move forward with the project, with GEM Energy.

“This system will save The Friendlies millions of dollars. As a not-for-profit hospital, that is millions of dollars that go back into services for our patients and this community. We will be able to reduce our impact on the environment at the same time,” he said.

While the system is believed to be the largest ever put on a hospital in Australia, it will still only be enough to power about 25.6% of the hospital’s electricity needs.

“While 25% doesn’t sound significant, it will save the hospital $3.1M in the first 10 years and $6.9M by year 20 years. That kind of money is so important for a regional community,” he said.

The solar panels will cover about 75% of the hospital’s footprint, utilising all suitable roof space. Mr Bonnett said as the hospital grows, all future development will be designed with the ability to incorporate more solar panels.

In terms of environmental sustainability, electricity usage in the first year will be reduced by 919,900kWh from the solar electricity and 229,000kWh from the installation of LED lighting, a total 1,148,000kWh.

As part of the solar installation project, The Friendlies, through SolarArk, will convert all four hot waters systems, each with five containers, to solar hot water. In just over 3 years, the hospital’s gas hot water bill will be zero, saving $84,000 each year.

GEM Energy and SolarArk will work in conjunction with the placement of panels and systems.

GEM Energy CEO Jack Hooper said it has taken a substantial amount of time and engineering to get to this point, but he was very excited about this project.

“The Friendlies are a great example of an organisation looking to secure their energy costs and provide a huge carbon off-set,” Mr Hooper said.

“We’ve seen some good systems installed here in Bundaberg and the installation for The Friendlies will be the largest roof top installation in the area.”

“Over the past 12 months in Queensland we have seen an increase in wholesale energy prices of more than 50% which is now being passed through to large market electricity customers.

“The Friendlies have seen an increase of 30% which has significantly improved the viability of their project and other projects of this scale”.

“Many local business owners understand how much of an impact soaring electricity prices have had on their profitability.

“A good quality solar installation gives them the opportunity to secure their energy costs and improve the financial and environment sustainability of their business”.

SolarArk QLD State Manager Chris Poulton said with the steep and continual upward trend in local Australian gas prices in conjunction with the commitment by The Friendlies to a significant Solar PV infrastructure, the numbers for return on investment with solar hot water could not be ignored.

“The adopting of a large scale system with The Friendlies commitment to solar electricity has provided the perfect scenario to migrate the hot water generation from the previous gas system over to primarily sun-generated sources,” Mr Poulton said.

“The Friendlies are to be commended for identifying the industry leading performance advantage and significantly longer life span of SolarArk Evacuated Tube Technology for generating hot water. This project will be the largest hospital-based evacuated tube solar hot water system in the nation.”

“SolarArk is honoured to be chosen to play a part in the betterment of The Friendlies facility and services, as well as the local community of Bundaberg”. 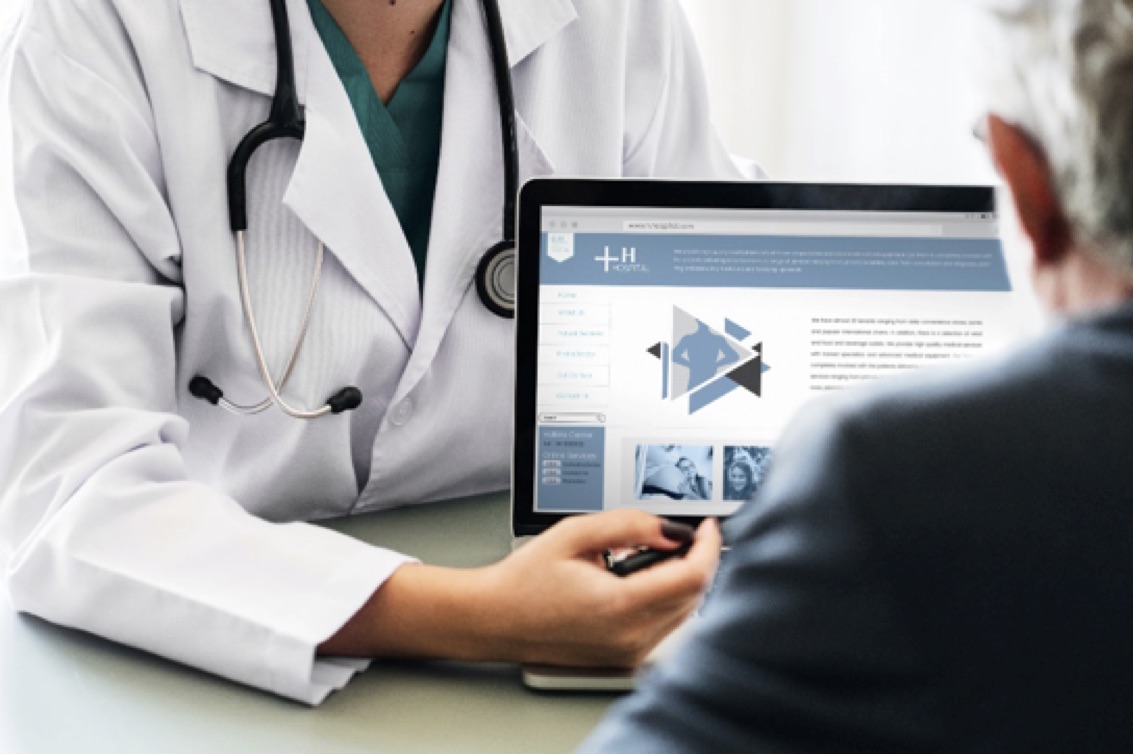 Among other things, a 15km commute between home and work was eating at me for quite a while. All that driving in a petrol car meant I did not feel I was living my values so in 2008 my wife and I opened a new practice in Yarragon, cutting the distance to work to only 3km. Although we do not own the property, we were able to have a hand in the design so passive solar principles, good insulation, double glazing and shading plants were all in the final result. Not too long after the building was completed and we settled in, it was time to add solar PV. This was still in the days of the premium feed in tariff which remains until 2024- the cost of the system was about five times the current cost though.

The main motivation for me was nothing to do with financial gain, in fact from that point of view it would have been better to wait a few years while the upfront costs plunged. For me it was all about doing my bit to reduce fossil fuel pollution. Climate change is the biggest game on earth after all- if we don’t address that then as far as I’m concerned, it’s all over for civilisation fairly quickly. A community group I’m involved in recently workshopped a phrase to explain why our group exists: “We’re cooking the planet. It’s scary. Let’s do something about it together”.

So, the biggest benefit from our solar system is on my mental health. I feel closer to the point where I can say that I’m living according to my values as a result of the types of buildings I live and work in, the car I drive, how far I drive in it and the community work I do. Other benefits are of course there- very small energy bills at work, providing an example to other businesses and satisfaction that early adopters like us have played a role in the current boom in rooftop solar.

I don’t know any doctors who are really having any financial difficulty. We are highly paid and respected members of our community. I believe we should use our position to play a leading role in advocating and acting on matters of public health. Nothing is as important as protecting the fundamentals of life- clean air, water, soils and food. Burning fossil fuels is destroying all these things and we need to stop it.